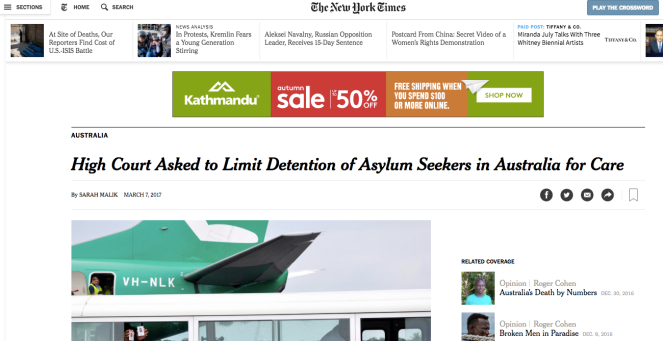 Legal aid lawyers have filed a constitutional challenge to Australia’s restrictive migration law and the legality of detaining asylum seekers transferred to the country from offshore camps for medical treatment or other temporary purposes.

A hearing in Australia’s highest court is scheduled for Wednesday in the capital, Canberra. A decision is not expected immediately.

Dan Nicholson, who oversees the migration program for Victoria Legal Aid, which filed the case, said a ruling could help clarify whether the Constitution allowed the Australian government to detain asylum seekers brought to Australia from the Pacific Island countries of Nauru and Papua New Guinea, and to define how long that detention could last.

“It’s an important case because it’s testing the government’s power to detain people who have not been charged with a criminal offense,” Mr. Nicholson said. “The nature of the detention is that there is no legislative time limit on it. There’s not even a requirement to give or even provide reasons.”

Under constitutional law, asylum seekers can be detained for “a reasonable period” for specific purposes, such as while they are being deported or awaiting visa approval. But Mr. Nicholson said some asylum seekers flown into Australia for medical treatment from offshore camps have languished for years in detention.

The case, filed in the state of Victoria, involves an unidentified mother and daughter from Iran. They were transferred from Nauru to Australia for medical treatment in 2014. In Melbourne, the mother was treated for osteoporosis and the daughter for removal of a breast lump. They have both also been treated for health issues arising from their detention, including anxiety and panic disorder.

They remained in detention for two years while they were being treated and were only released into so-called community detention, which allows for some freedom of movement but has curfews and other restrictions, after the first submissions in their case were filed.

“The point is they are not brought here to have their refugee status determined,” Mr. Nicholson said.

If the challenge to detention is successful, it would be mean those brought here for medical treatment from offshore processing centers — where Australia has been confining hundreds of asylum seekers intercepted at sea since 2012 — could not be incarcerated while being treated. Generally, only the most seriously ill asylum seekers are brought to Australia for medical attention. About 70 are in the country now.

Conditions in Australia’s offshore camps have been criticized by human rights groups. A recent Amnesty International report likened conditions in Nauru to an “open-air prison.”

In 2014, an Iranian asylum seeker detained at Manus Island in Papua New Guinea died after developing severe sepsis from a leg infection. An inquest into his death last year found delays in transporting him to a hospital in Australia for treatment.

“This is not just an academic exercise,” Mr. Nicholson said of the Victoria case. “It does real harm to people’s health.”

Legal experts said the case was part of a broader effort to challenge the expansive powers the Australian government had given itself through successive changes to the Migration Act — the law regulating the government’s powers to make decisions relating to migration and asylum.

Ben Saul, an international law professor at Sydney University, said the impact of the decision in the case would most likely be limited.

Australia, he said, is “highly unlikely to close down offshore detention because it insists that existing health care is adequate, despite the overwhelming evidence that protracted detention undermines refugee health.”

Mr. Saul added that even if the Victoria Legal Aid case succeeded, its impact might not last long in the current political environment.

“Australian governments have a habit of legislating quickly to neutralize or overturn unfavorable High Court decisions in relation to immigration,” he said, “particularly since Australia has no constitutional bill of rights to prevent parliaments doing whatever they want.”

Mr. Nicholson said the case needed to be filed, regardless of its lasting impact. “We know that this detention is very harmful to people, including our clients,” he said. “There are doubts about its legality, so it’s important that it is tested.”